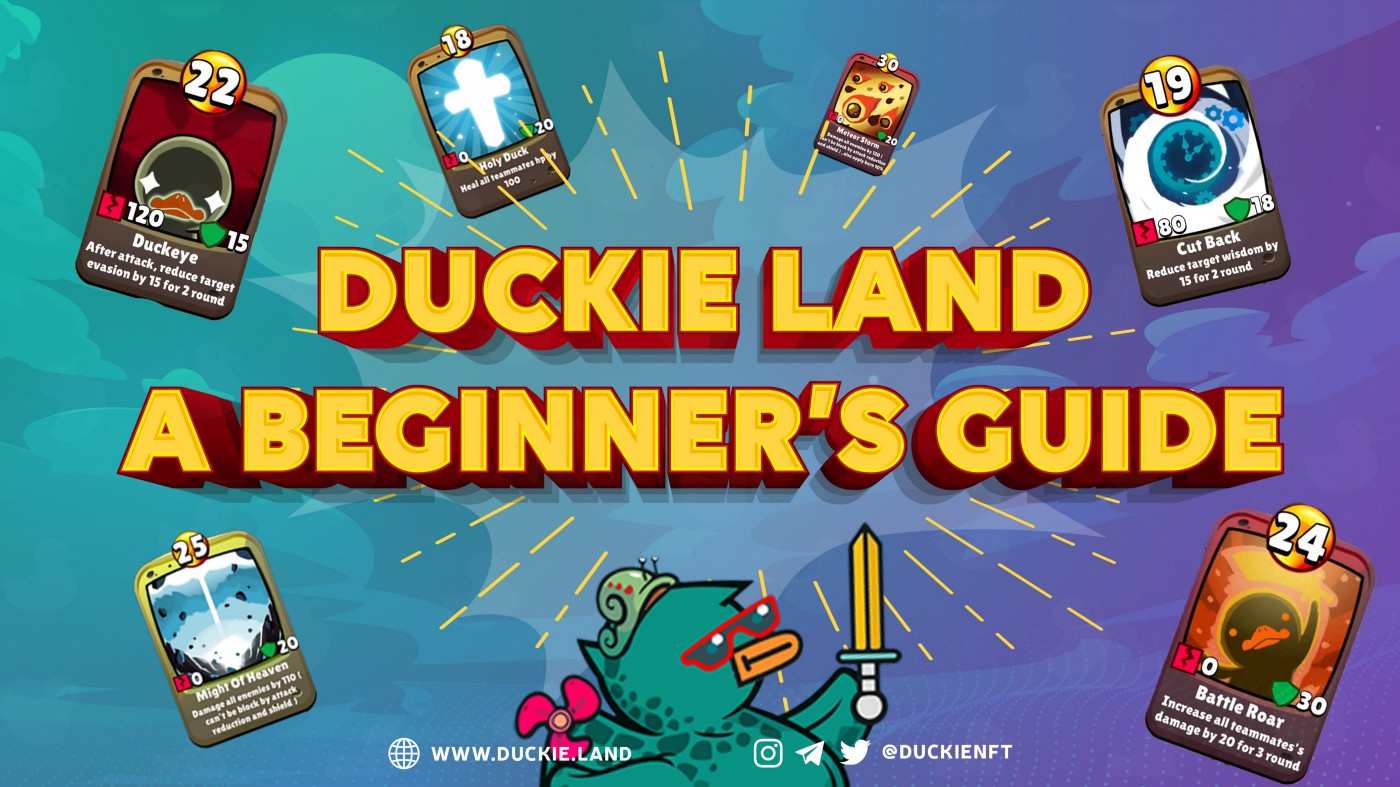 Our team created this guide to help players properly understand about Duckie Land as well as the game system that comes with it. Please take a moment to read this guideline so that you might improve your performance in the game! Let’s just get this adventure started!

Duckie Land is a metaverse multiplatform (PC, Android, IOS and VR) multiplayer online game that runs on the blockchain, and each Duckie is a non-fungible token or NFT. Millions of people can participate in the NFT world and earn reward tokens through skilful gameplay and contribution to the ecosystem.

Duckie is a multiplatform game in which players take a team of Duckies through a challenging world of monsters to collect rewards and resources.

Players can purchase Duckies from the marketplace to begin playing the game. Players get to choose a team of Duckies to fight in each battle from among all of their Duckies before the battle begins. Players can also choose between leveling up the Duckie by fighting enemy monsters in the Adventure Stage (PVE) or competing in the leaderboards by battling with other player’s teams in the Battle Arena (PVP).

In both game modes, players will get $WAFER as rewards. These rewards are the main resource that players need in order to farm and sell for real-life money.

Duckie has the following stats:

Strength
Strength stats will affect the amount of HP (Health Point) of Duckie.

Damage
Damage is the basic attack damage and will increase the attack of skill cards.

Speed ​​
Speed stat determines how fast the duckie is. This speed will also determine the order of the duckie’s attacks.

Critical
The base stat that determines what percentage chance a duckie’s attack will deal critical damage.

Wisdom
The basic stat that will reduce the amount of energy consumption. 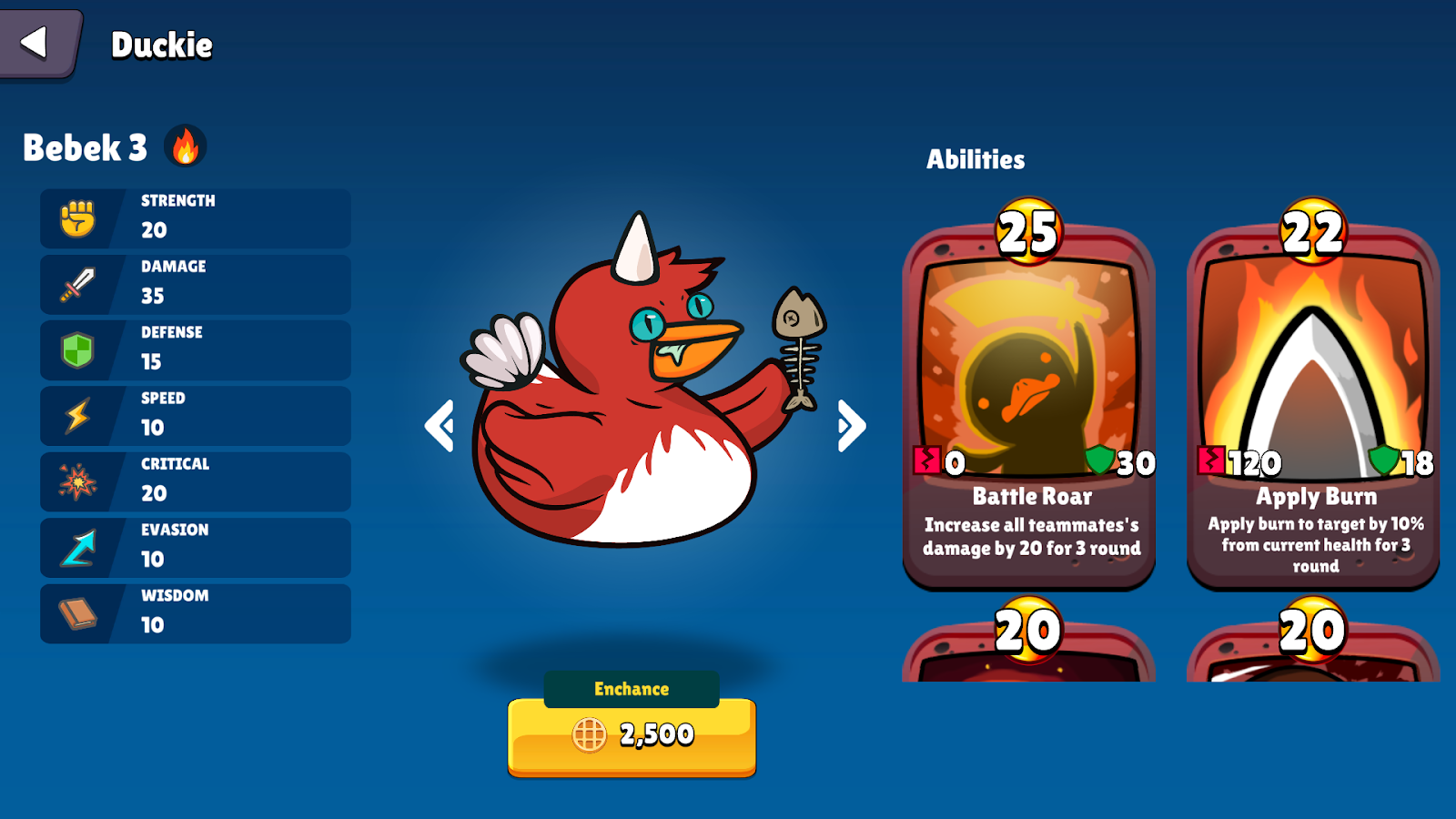 There are 8 parts in a duckie, which are Body, Pattern, Color, Hat, Eye, Mouth, Weapon and Tail. Each body part has a different element and specific ability. 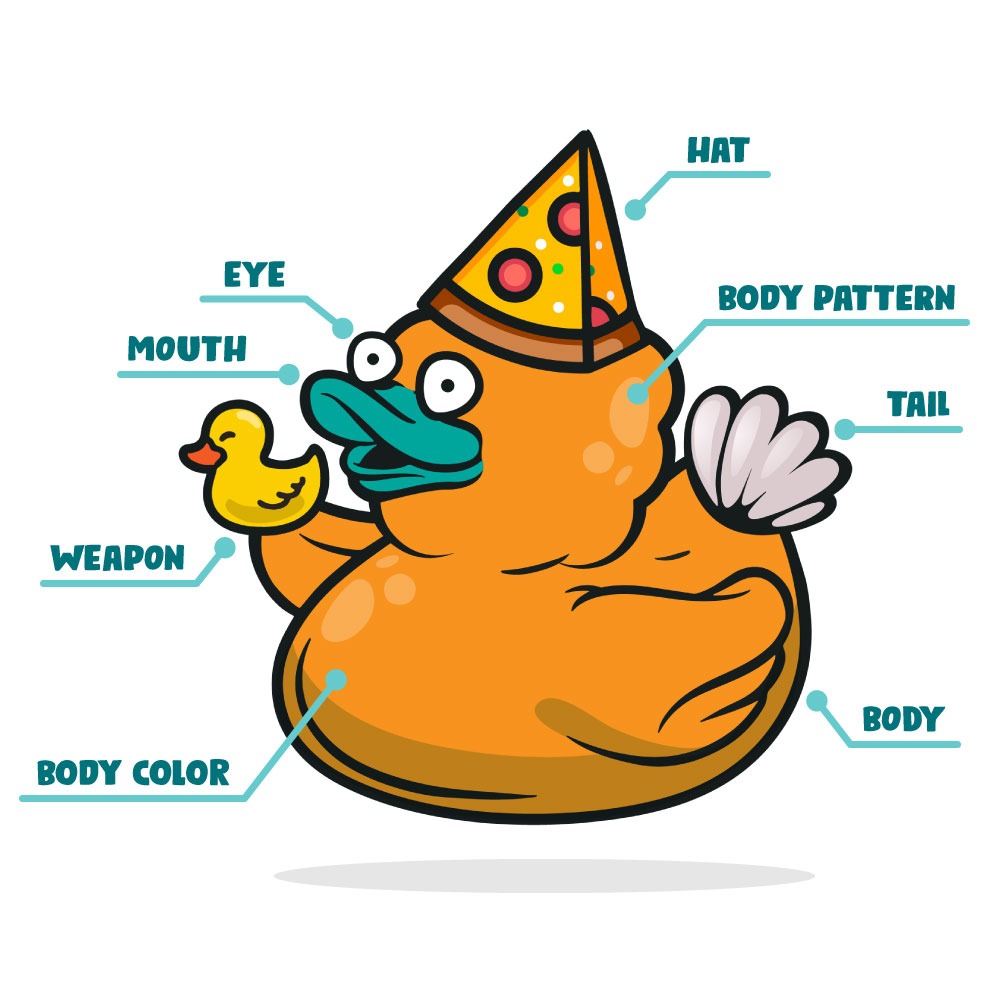 Inside Duckie and its body parts, there are 7 elements that have their own power and weakness. One element and another element will have a certain relationship, where the relationship will have advantages, weaknesses or have no effect. The elements of the Duckie are determined by many of the same elements of the body parts. The same number of elements will add strength to the duckie against certain duckies.

The elements and relationships are as follows: 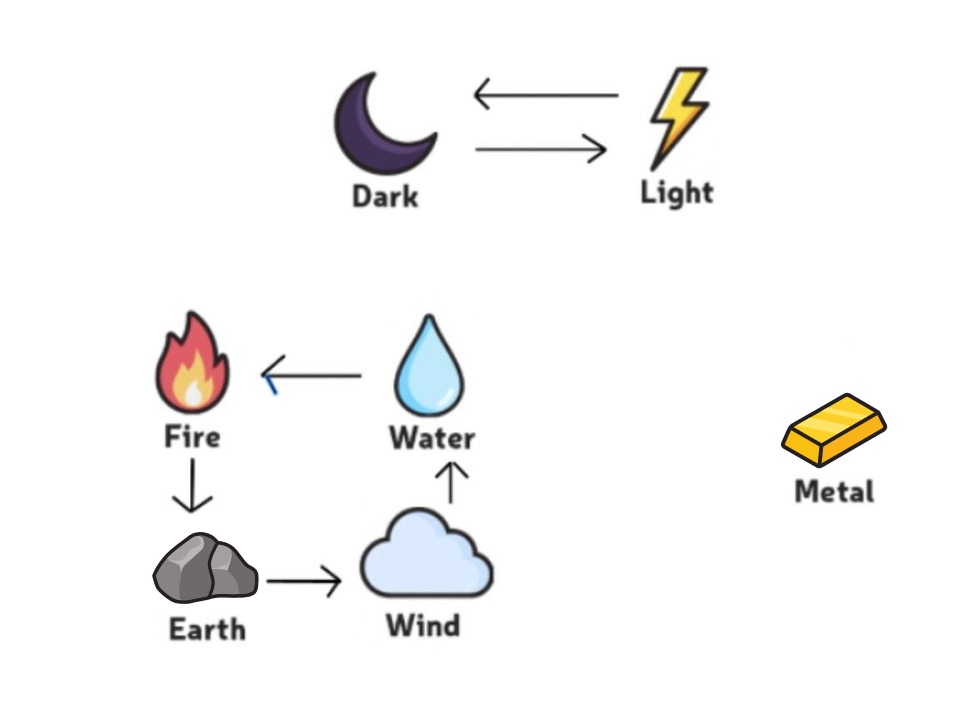 The direction of the arrow shows the advantage element being attacked, with an explanation:

The damage calculations as follows: 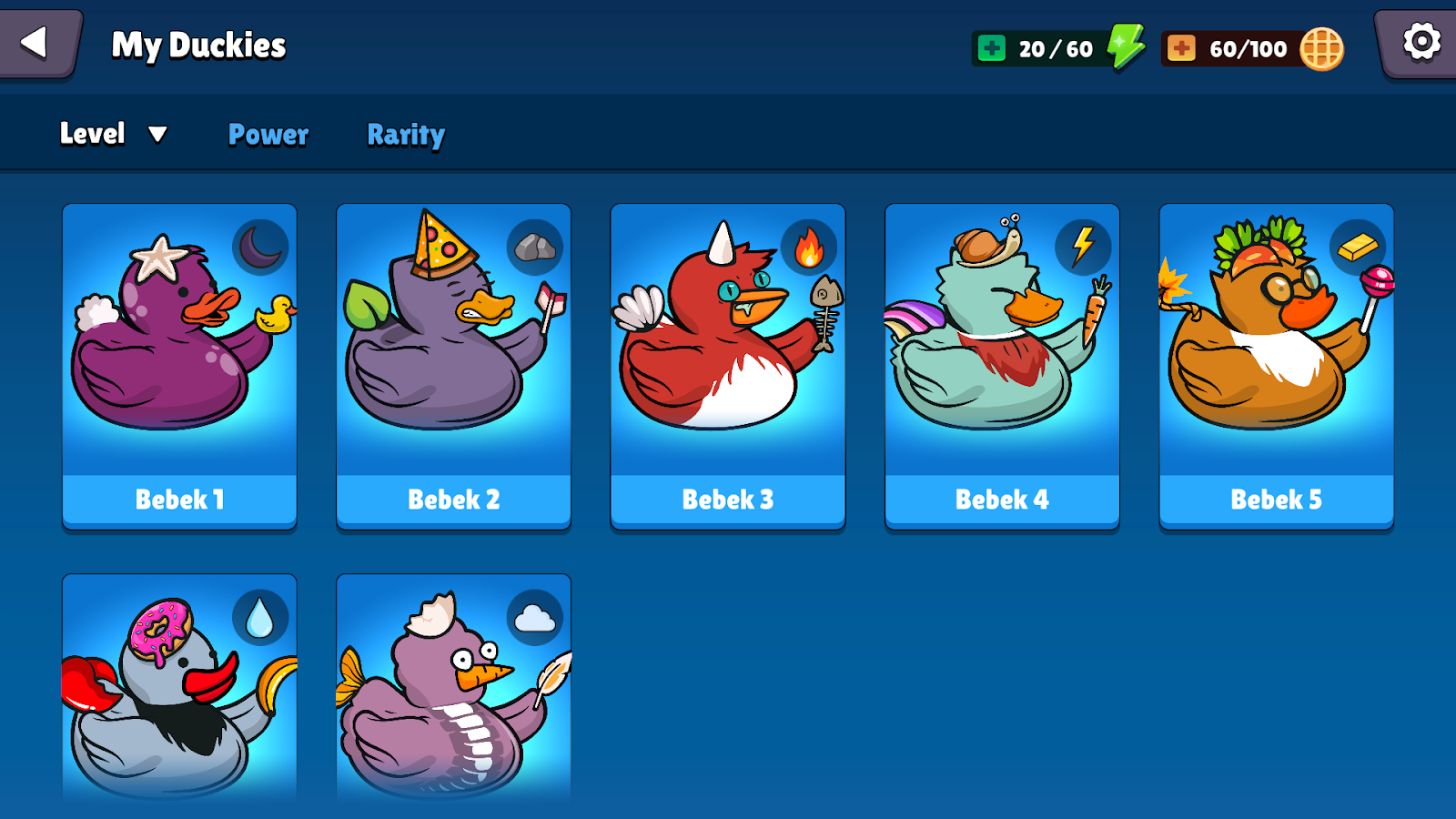 In Duckie Battle Arena, Players need to form a team of three duckies to face an opponent, choose wisely because Duckie holds the great power with the card players later use in battle arena. Those Duckie functions can directly affect gameplay, cards with attack & effect are often reusable and impact strategy to a significant degree. Players could use the cards to counter opponents , create a defense, and also strengthen the duckie.

For the first timer player will be equipped with 3 sets of cards and 15 energy from 3 Duckie Characters. Every Duckie is going to have 4 skills with 3 cards provided for each (in total each duck will have 12 sets of cards), Players will be provided with 36 sets of cards in total at the beginning of the game.

For the next round, Players will get the chance to draw 2 cards with 30 energy. Do not be worried if the card on the deck is finished because it will be recharged from the remains of Duckie who is still alive in the battle arena.

Let’s talk about the cards Players have once they’re in the battle arena. 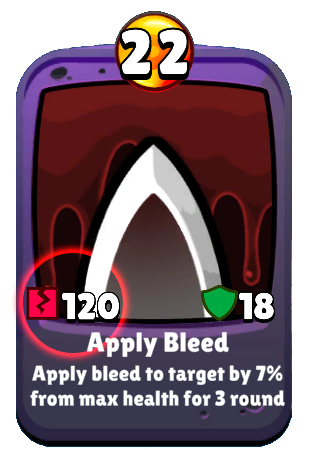 Cards with basic attack and modifier damage could be used as defense, shield, armor and once hit with critical damage the stat will be increased. 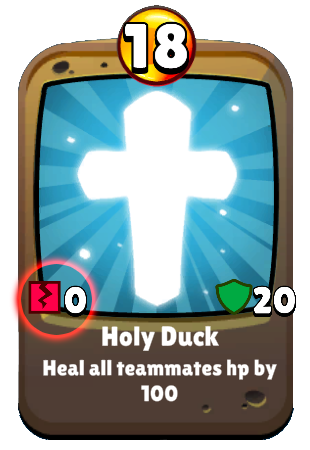 Cards with no basic attack (attack = 0), without modifier damage skill but able to release special effects (damage, buff or debuff).

Players might be wondering about buff and debuff, what effect do they give to duckie ?

A positive impact is known as “Buff,” whereas a negative effect is known as “Debuff.” They can be used on your allies or your opponents by using Players Cards. Duckies who are affected by certain status effects have a floating word over their bodies that indicates which effect is active, players also can see the remaining hp on duckie head.

To assist players, here are some explanations about buff and debuff effects on battle arena :

Players can use buffs to remove debuffs (any debuffs, including some specific debuffs (ex: stun, poison, burn, etc.)), which is also known as dispel.

Buffs can be used to attack players in the battle arena, to boost Duckie’s energy, and to taunt Duckie’s enemies (by causing them to attack Duckie with the taunt buff (only applies to attack skill and spell skill with single target effect). Buffs can also be used to heal players’ Duckie and increase Duckie stat.

Here’s some cards with buff abilities : 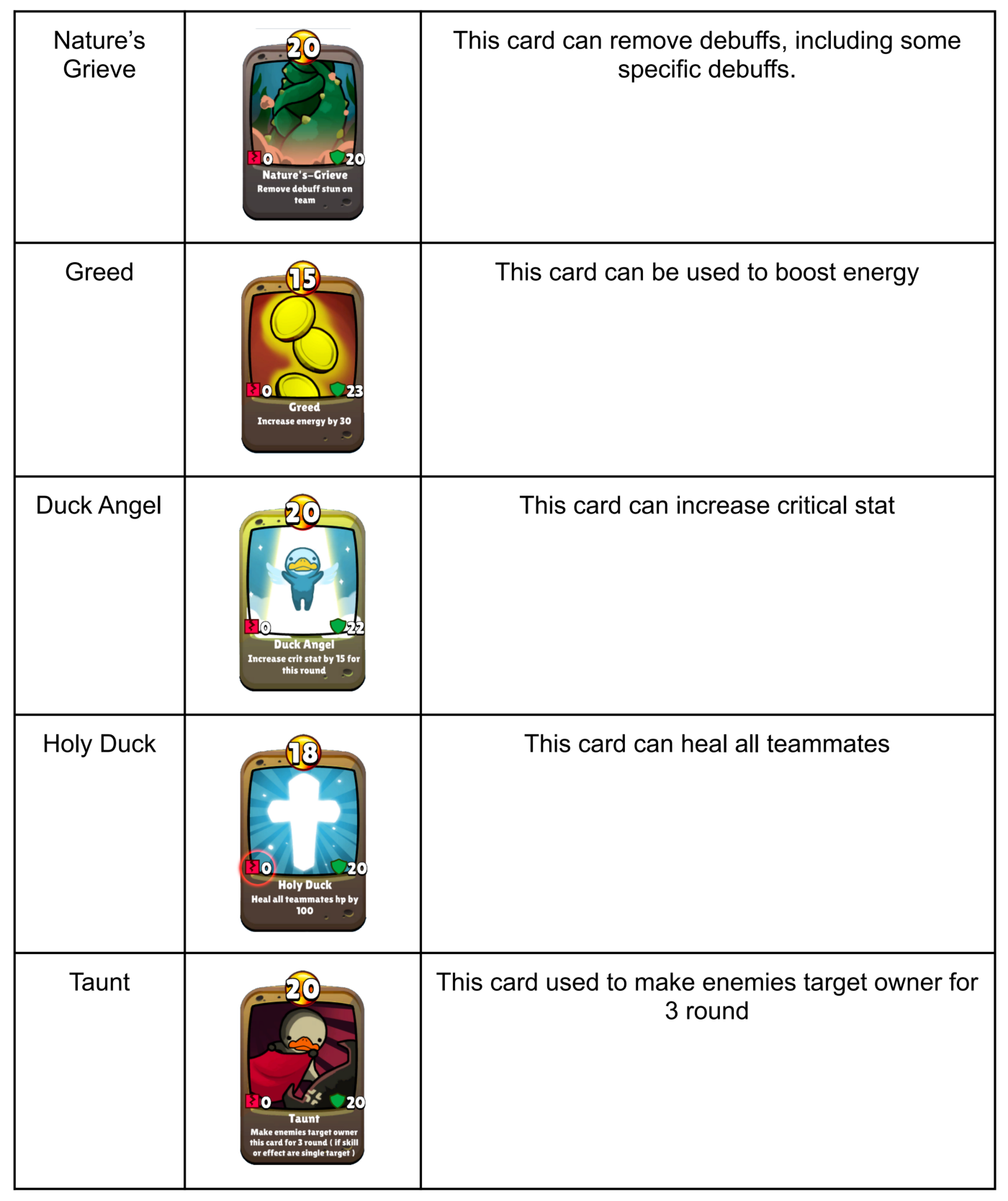 Debuff in duckie land could be used to decrease Players’ Duckie stat, also another negative effect is debuff could make us swap Duckie enemy position.

There are some cards with debuff abilities such as : 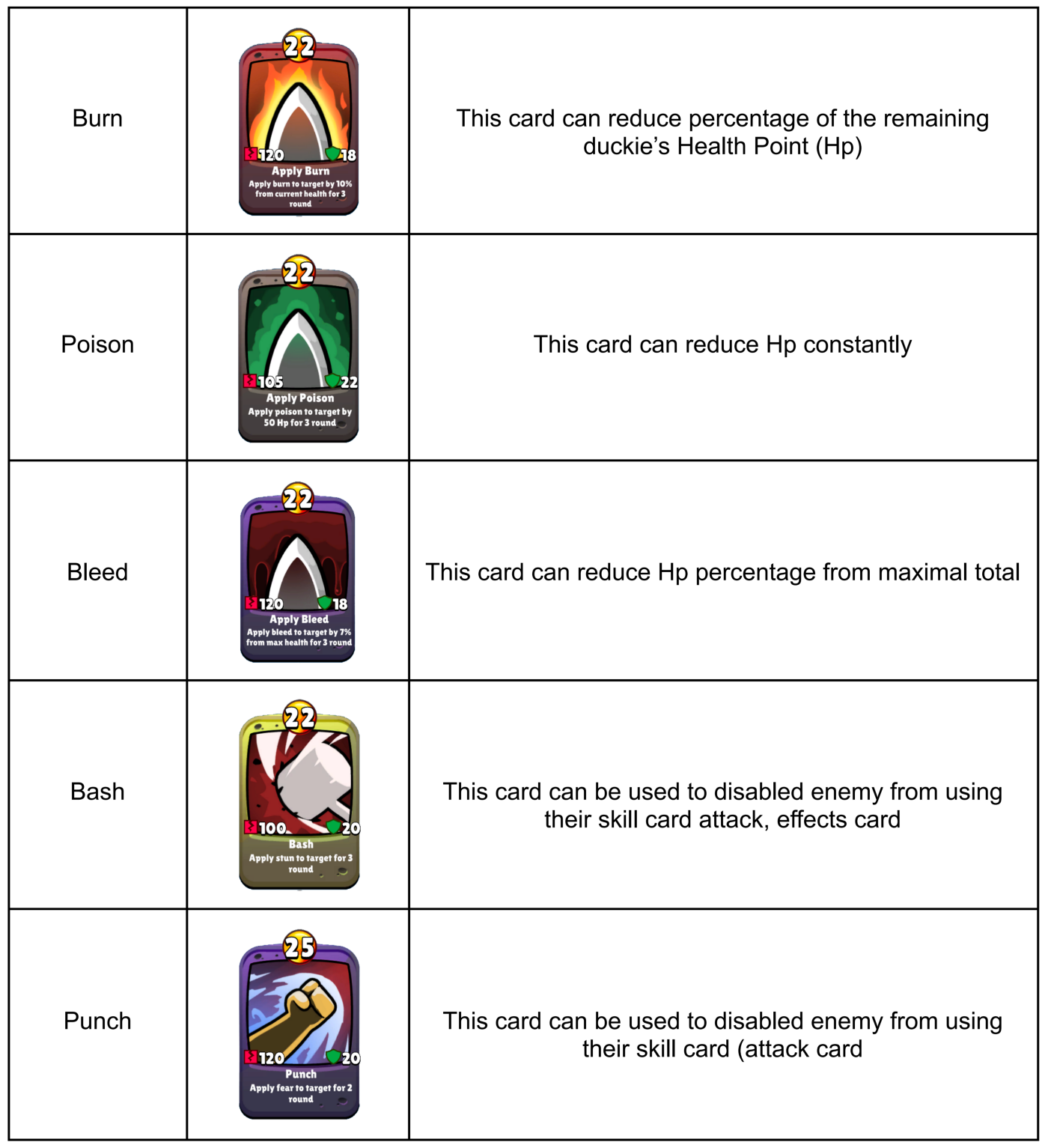 What is Duckie Land?

Duckie Land is a multiplatform multiplayer online game that runs on the blockchain, and each Duckie is a non-fungible token or NFT. Millions of people can participate in the NFT world and earn reward tokens through skillful gameplay and contribution to the ecosystem.

Duckie Land gives gamers ownership of in-game assets and allows them to increase their value by actively playing the game. By participating in the in-game economy, players will receive rewards and create more value for other players and the ecosystem. The rewards for these digital assets are cryptocurrencies and in-game resources that are tokenized on the blockchain, which could become a new revenue stream for many people, especially during the Covid-19 pandemic.